“a way a lone a last a loved a long the riverrun, past Eve and Adam’s, from swerve of shore to bend of bay, brings us by a commodius vicus of recirculation back to Howth Castle and Environs”         - Finnegan’s Wake,  James Joyce

RiverRun interrogates how Rivers are ecological arturaries of human and non-human well-being. In the UK and throughout Europe our rivers are seriously polluted from human waste release, farm run-off of nitrates, phosphates and animal waste, and algae growth.

Among this detritus, RiverRun celebrates just how magical a river can be – inspirational, healing, and imbedded into our own psyches - musically celebrated by so many artists.

For twenty-two hours a soundscape explores the chalk rivers of Dorset – home to salmon runs, eco-diversity, the sound of beauty, creatures, and magic. Through the spoken word,  learned papers, fables, harvested hydroponic creatures, the dawn chorus, and the work of science, RiverRun brings what we have and what we stand to lose.

David Buckland creator and founder of the Cape Farewell project, an artist, filmmaker, and ecological activist has created and directed RiverRun.

A team of sound artists, writers, poets, scientists, anthropologists, narrators, and musicians have contributed in force:

Professor Veronica Strang, Writer, and author of Water, Nature and Culture, The Meaning of Water and Water Beings (to be publisher March 2023)

Each chapter starts with a reading from Finnegans wake using different voices and voice treatments:

“a way a lone a last a loved a long the riverrun, past Eve and Adam’s, from swerve of shore to bend of bay, brings us by a commodius vicus of recirculation back to Howth Castle and Environs”

‘Take me to the River’  performed by Talking Heads

[Helen Moore was commissioned by Cape Farewell to write her long form poem over a period of a year in 2021, working with river scientists, farmers and artists in Cape Farewell’s RiverRun project first exhibited at Lighthouse in Poole November 2021]

Pink Floyd: The Piper at the Gates of Dawn

[Pink Floyd first album inspired by The Piper at the Gate]

Pink Floyd:  The Piper at the Gates of Dawn

Sounds of the PONDS by Adrian Newton and David Rogers.

Veronica Strang reading from her book: Water - Nature and Climate

[Veronica Strang, a cultural anthropologist, has written many books all focused on Water, what it is, what it means and why we must protect it as it suffers from human expansion. She travelled down from Oxford to the WaterShed to spend a day reading from her books and sharing her passion for all things water]

[Handel was commissioned to write the Telemann suites in response to George 1’s request for a concert on the River Thames. “At about 8 p.m. on Wednesday, 17 July 1717, King George I and several aristocrats boarded a royal barge at Whitehall Palace, for an excursion up the Thames toward Chelsea. The rising tide propelled the barge upstream without rowing. Another barge, provided by the City of London, contained about 50 musicians who performed Handel's music. Many other Londoners also took to the river to hear the concert. According to The Courant, "the whole River in a manner was covered" with boats and barges. On arriving at Chelsea, the king left his barge, then returned to it at about 11 p.m. for the return trip. The king was so pleased with Water Music that he ordered it to be repeated at least three times, both on the trip upstream to Chelsea and on the return, until he landed again at Whitehall.[2]” Wikipedia ]

The Wind in the Willows, Chapter1. Mandi Bissett reading in French.

[Mandi Bissett co-directs Cape Farewell with David Buckland. Fluent in four languages, Mandi is a passionate European and in despair over Brexit]

To include Bats music and river sounds and bird sounds.

PJ Harvey - Down by the Water

Down the River to Pray – Alison Kraus

Wind in the Willows, Chapter 1, read by Dr Kate McMonies [with Liverpool accent]

Down by the River- Neil Young

Veronica Strong reading from ‘The Rights of Rivers’.  Poly Higgans – Ecocide: destruction of the natural environment by deliberate or negligent human action.

Veronica Strong reading from The Meaning of Water.

Down by the River – Alison Kraus

Pissing in the River – Patti Smith

Yes, the River Knows – The Doors

Reggae on the River – Isreal Vibration

Sounds of the Pond – Newton/Buckland

Many Rivers to Cross

Take me to the River – Talking Heads

Down by the River – Neil Young

Yes, the River Knows – The Doors

Ferry Cross The Mersey – Gerry and the Pacemakers

Take me to the River – Al Green

Down to the River – Alison Kraus

Many Rivers to Cross – Jimmy Cliff

Kawa No Nagare No You Ni – Hibari Misora

Buckland thanks the Artists who helped craft RiverRun

The Piper at the Gate – Pink Floyd

Pissing in the River – Patti Smith

Down by the Water – PJ Harvey 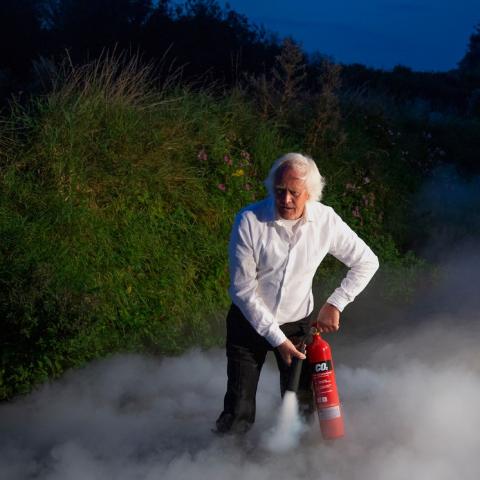 David Buckland is an artist, film-maker, writer and curator. His work is included in the permanent collections of the National Portrait Gallery, London, the Centre Georges Pompidou, Paris, the Michael Wilson Collection, London and the Metropolitan Museum of New York.

Buckland created and now directs the international Cape Farewell project. Bringing artists, visionaries, scientists and educators together, Cape Farewell continues to build an international collective awareness and the cultural response to climate disruption. Over 140 artists have created operas, films, artworks, pop music and novels which address the climate challenge and through the process of making art, vision a sustainable and exciting cultural future.

Buckland curates three new major exhibitions:  the 'CARBON 12' exhibition recently opened in Paris in May 2012. 'CARBON 13' opens in Marfa Texas in September 2012 and 'CARBON 14' is scheduled for the Royal Ontario Museum in Toronto, September 2013. All contain new artworks by international artists and cultural practioners, each addressing climate disruption and the mechanics of a desired cultural shift.

Recent publications include ‘Climate is Culture’ for Nature, March 2012 and the catalogue Carbon 12, published by Somogy Editions d’Art.