You are invited to witness two live musical improvisations as part of this show:

16:00 - 16:45 Caroline Kraabel & John Edwards in the Cueva exhibition at Metzeschmelz

A blend of music, life-stories, effects, played examples, sections of recorded improvisations and the words of different improvisers, including many whose roots are outside Europe/the USA. Featuring improvised acoustic music, electronic music and atmospheres, interviews with improvisers, conversations between improvisers, pre-existing recordings of improvised musics… and segments of live improvisation by John Edwards and Caroline Kraabel.

Exploring improvisation and identity: even the world of improvised music can be experienced as an enclave that excludes, despite the perceived association of improvisation with limitlessness and freedom.

How do people who improvise feel and think DIFFERENTLY from each other on the subject? How do we avoid – or alter – any dominance of particular groups over the theory or practice of improvisation?

Does the experimental nature of improvisation make it easier for members of élites to shine in the field, because they have more pre-existing socio-cultural capital that validates their experiments?

Or is improvisation easier for outsiders who are already primed to find alternative paths?

How are improvisers affected by their musical and cultural histories?

For improvisers who have experienced forms of oppression in music making and/or life, is the aim when making music merely to recapitulate existing power structures, but try to place themselves at the top, or to create new and fairer structures?

As well as interviews with improvisers gathered over the space of two years, this piece features live improvisation and sounds specific to the person/people speaking, as well as two types of short segment, included here and there throughout its 22 hours. Some of these segments are Bute Sangs – improvised songs made by Ivor Kallin in Bute. Others are fragments of sound from a wide range of sources, invented, treated and created by John Edwards.

Most of the speakers use English, two speak in French.

Oliver Nelson, Teenie’s Blues, from The Blues and the Abstract Truth

Aaron Neville (of the Neville Brothers, childhood friends of Aldridge)

The Code noir was passed by Louis XIV of France in 1685. It defined the conditions of slavery in the French colonial empire: restricting the activities of free people of colour, mandating the conversion to Catholicism of all enslaved people throughout the empire, defining the punishments meted out to slaves, and ordering the expulsion of all Jews from France’s colonies.

The code’s effects on the enslaved population of the French colonial empire were complex and multifaceted. It outlawed the worst punishments inflicted upon slaves by their ‘owners’, and led to an increase in the free population. Despite this, enslaved persons were still subject to harsh treatment; the expulsion of Jews was an extension of antisemitic trends in France.

Free people of color were placed under restrictions via the Code noir, but were otherwise free to pursue their own careers. A free person of color in the French colonial empire was much more likely to be literate than in other New World colonies, and had a high chance of owning businesses, properties and even slaves. The code has been described as ‘one of the most extensive official documents on race, slavery, and freedom ever drawn up in Europe’.

Val Wilmer, As Serious As Your Life

Margaret Barry, Her Mantle So Green

11 minutes of Scrapes, by John Edwards

Derogatory terms used about improvised music (!): a fire in a pet shop

Kraabel/Thomas duo from forthcoming CD on Shrike label. Recorded at The Vortex, London, 2022

Chamber Pot, Sparks Of Desire Magneto Are Being Inseminated Into Different Vessels

Barry Summer School (for jazz and improvised music, until 1982) 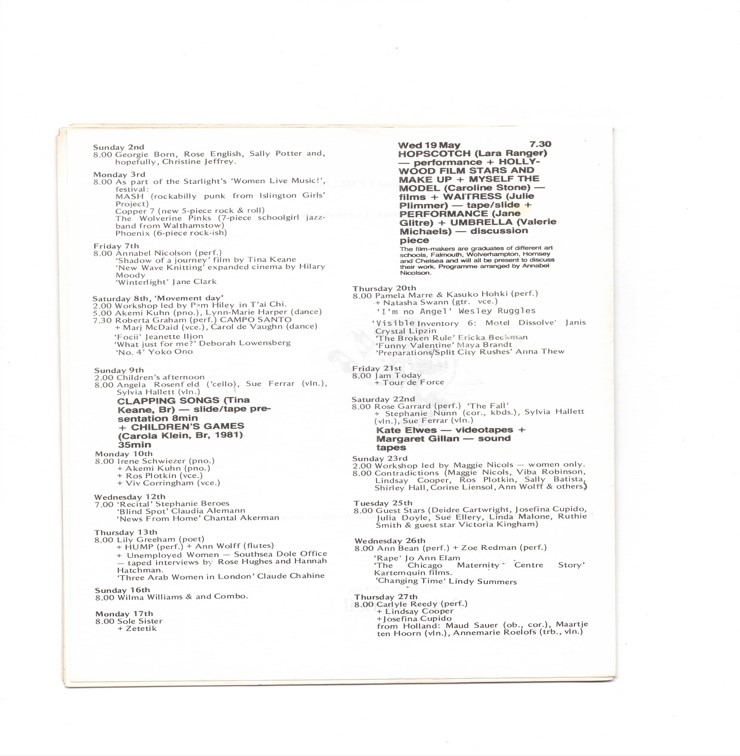 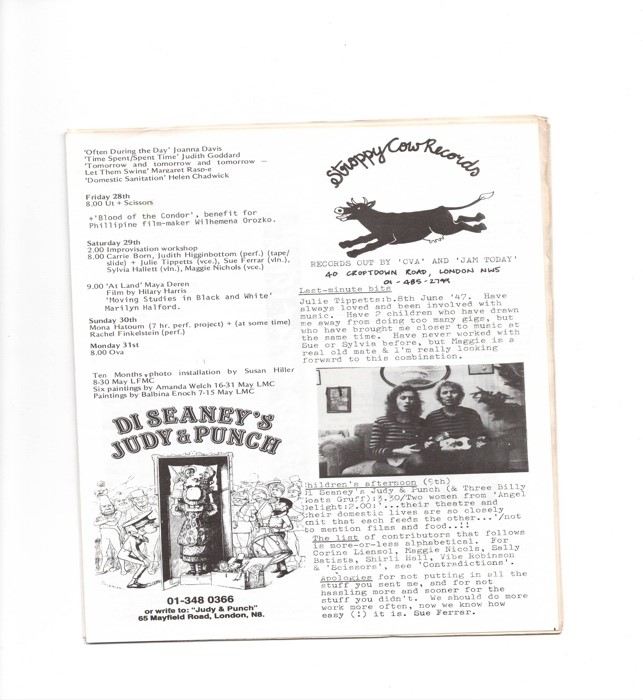 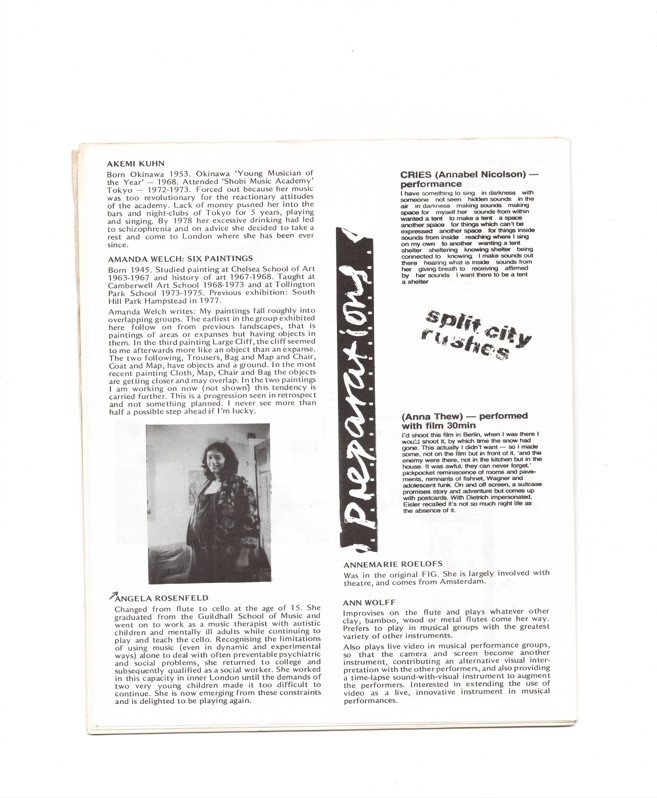 Piobaireachd: Lament For The Laird of Annapool

Oxy and the Morons

Improvisation with conducting from Dee Byrne

From Now We Are One Two, solo CD

I’m Getting Sentimental Over You

Thanks to: All the musicians! Knut Aufermann, Sarah Washington and the whole team at Radio Art Zone. Café Oto, The Vortex. All the great improvisers who inspire us and our interviewees. 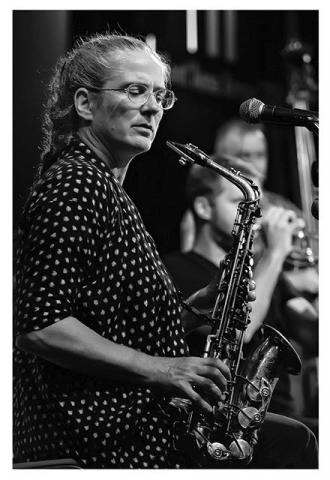 Caroline Kraabel is a London-based improviser, saxophonist, artist and composer. She has been conducting and playing with the London Improvisers Orchestra (LIO) since 1998. Sometimes she improvises on solo saxophone while walking in London and elsewhere (broadcast weekly over several years on Resonance 104.4 FM as Taking a Life for a Walk and Going Outside). Other radio work includes a series of interviews with improvisers in many media (music, dance, visual art, politics, activism), Why is Improvising Important.

Kraabel compositions include Performances for Large Saxophone Ensemble 1, 2, 3 and 4, for 21-piece spatial saxophone ensemble; Get Used To Balancing, a suite of pieces for alto sax, percussion and two flutes; Now We Are One Two, a 45-minute solo, Recording The Other, for soprano, cello, flute, piano and four recording devices; LAST 1, 2 and 3 for pre-recorded voice and ensemble; many songs; numerous pieces for large improvising ensembles in London and around the world.

During 2020-22 Kraabel performed live off- and on-line, and while walking through London; made and shared many recordings of duo and solo live improvisation; made a piece of performance art (Depletion) for APT Gallery, London; created a number of socially distanced large-group pieces for the LIO; was artist-in-residence at UNCOOL in Poschiavo, Switzerland; and worked on her 40-minute soundfilm about lockdown London (London 26 and 28 March 2020: imitation: inversion), which received its avant-première at London’s Café Oto on 25 February 2021, is available on the Jazzed app, and won the 2021 Ivor Award for Sound Art Composer.

In 2022 Kraabel has brought together a large improvising group made up of women, non-binary, and transgender improvisers: Orchestra New (ONe). 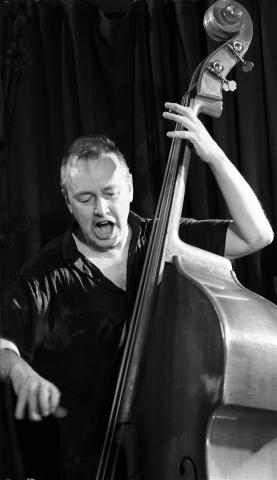 John Edwards is a true virtuoso whose staggering range of techniques and boundless musical imagination have redefined the possibility of the double bass and dramatically expanded its role, whether playing solo or with others.  Perpetually in demand, he has played with Evan Parker, Caroline Kraabel, Roscoe Mitchell, Sunny Murray, Derek Bailey, Joe McPhee, Lol Coxhill, Maggie Nicols, Louis Moholo, Peter Brötzmann, Mulatu Astatke and countless others.

"I think John Edwards is absolutely remarkable: there’s never been anything like him before, anywhere in jazz." - Richard Williams, The Blue Moment