You are invited to visit the Apdikt, behind the Bridderhaus, 1 Rue Léon Metz, 4238 Esch-sur-Alzette, to experience this live show during its whole duration (from 14:00 CEST until 12:00 noon on Sunday 18 September). Free entry.

The bauhaus.fm-Rundfunkorchester consists of activists of the experimental radio station "bauhaus.fm", alumni of the Bauhaus University Weimar and friends*. Inspired by the participation in the radio art festival Radio Revolten 2016 (Halle) as well as in the live program "SAVVY Funk" (Berlin) as part of the dokumenta14 radio project (2017), the group has been working on their own live improvisations since the beginning of 2017. In over 30 recordings of the live radio concerts at bauhaus.fm as well as in recordings of concerts in Cologne, Dresden (Coloradio) and Halle (Radio Corax), the sonic diversity of the material used as well as the use of unconventional sound generators can be seen. In 2021, the orchestra was awarded the "born to be bauhaus" art prize by the bauhaus university archive in Weimar. The collaborative instrument "Funkstern plus", financed by this award and developed with the artist Steffen Koritzsch (noisio.de ), lets the group itself become a radio station. It invites the audience to become part of the performance with their own radio receiver. 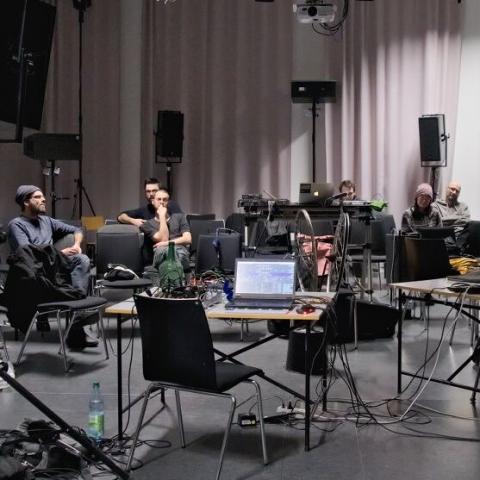