If Oda Projesi makes a radio within a radio only for 22 hours, what would it sound like? What sounds can this radio carry? In 2005 for a local radio channel in Istanbul Oda Projesi did a programme that was called "radio within a radio 101.7EFEM". There we "acted" as if a radio channel; with news, interviews, advertisements, but also parasites interfering with and within the radio channel. (The programme originated from a pirate radio station we have organized with Matthieu Prat in the neighbourhood of Oda Projesi in 2005 for one month; just before leaving our project space.) Now if we have 22 hours then we plan to have 22 people, 22 places, 22 acts, 22 strategies, 22 incidents in this 22 hours of broadcasting. The main concern will be (can be) on motherhood (as this is a theme we are currently working on). The members of the collective, who have focused their research on "motherhood and production" since 2013, have had a series of conversations with groups of mothers who are not limited to their own experiences. During these meetings, “How were our daily life and art practices shaped after becoming a mother? How did maternal states affect our production? "What does it mean to be a mother and an artist at the same time?" were some of the questions.

Radio within a Radio

Through motherhood and production

Güneş asked questions in the context of Ana Project.

Music by Pipilotti Rist - “Victim of this song”

Güneş cooked and listened to music by humming songs, she watched TV (Netflix- “Working Moms”) she ate dinner and did housework.

Songs by the street musicians Siyasiyabend

“How many different types of motherhood exist in the world?”

An audiowork about being interrupted by Nadin Reschke

Güneş’s sister Gözde answers the question “What does ‘sisterhood’ mean”?

A conversation between Esra Sarıgedik Öktem and her daughter Defne.

Women Who Run with the Wolves by Clarissa P. Estés

From a conversation between Özge and Anitha, July 2022

Talking about the meaning of the word “Meydan” with Anitha Silvia.

From a conversation between Özge and Anitha, July 2022

A Dictionary of Sensitive Sounds by Evrim Kavcar & Elif Öner, 2019 - work in progress

Anitha Silvia spent one hour at Bik Samona’s stall at Pasar Tembok Lor, Surabaya, Indonesia. Bik Samona is a Madurese woman peddler and her stall is the baskets right on the pavement and she sits down on the very short chair. She is non-stop calling people non-stop to buy. Pasar Tembok Lor is an open-air non-government market, run by its people from 6AM until 10AM daily. Recorded May 12th 2020 by Anitha Silvia

Sweet Honey in the Rock

The women of Kokopelli (Kokopelli Şehirde is a space for learning and experiencing sustainable living and ecology for children and adults.) from Istanbul answer the question: “Is it possible to make a revolution in the kitchen? And if it is possible, what kind of a revolution would it be?” 2022.

This is the sound of an afternoon sleep and everything else that passes [...] and above all the sound of soft silence (with Karyn’s words) 2022.

In this 45-minutes sound piece Oda Projesi has guests answering questions on invisible labor, motherhood and radio. This is a continuation of Oda Projesi's "Radio Within a Radio'' that was a contribution for Radyo Bienal previously broadcasted at Açık Radyo. Oda Projesi's work on motherhood will also be shared as Anne(x) newspaper during the 17th Istanbul Biennale. The piece will be hearable soon through the biennale podcast series. Güneş Savaş invited four female artists Myriam Varela, María Gimeno, Karen Raicher and Aylin Önel. They answer the questions: What does it mean to feel like you belong somewhere? What kind of labour action takes place inside the house for a sense of belonging? Özge Açıkkol invited Elin Strand Ruin and Biray Kolluoğu. The artist/architect Elin Strand Ruin answered the question: Is it possible to make a revolution in the kitchen and if it is possible, what kind of revolution would it be? Biray Kolluoğlu is a professor of sociolgy and she reflects on the "invisible labour of the egg". Seçil Yersel invited Kija Benford, the founder of Vrouwenmantel Art Research Group and Kija invited mother and artist Eefje Wijnings, Danni van Amstel and Chloë Marsden who answered the questions: Is there a connection between invisible domestic labor and the invisibility of the radio? How can invisible labor have visibility within the invisible radio field? Does gossip make the invisible, visible? What kind of labor action takes place inside the home when you think of the feeling “belonging”?

A voice sounds the text Burcu Yanmaz has written for a video work she did for Til Vaegs 2021, exhibition. Burcu was one of the kids we met in 1997 from the Galata neighbourhood and now she is a mother.

Radio within a Radio 101.7EFEM programme Oda Projesi did for Açık Radyo 2005

We can Dance sound piece by Ula Woźniak

Asako Iwama is together with her mother Sachiko Iwama and son Oto Iwama. Her mom tells a Grimm story about rice soup, Oto tells and sings about Ogomago and Asako reads a good night picture book on food traveling inside our body.

Motherhood as a spam piece taken from a radio interview done with the invitation of minusSPAMminus. It is a work for radio made of spam facts, + and – regarding spam, personal stories triggered by spam in a material, non-material, historical and emotional manner, all assembled by Jasmina Al-Qaisi and Ralf Wendt.

Laundry notes from Seçil when she visits the laundry thinking that it is better to wash the things outside the house and be in the laundry space for reading and dreaming.

A Never Ending Story of Motherhood

We thank a lot to the listeners, to our guests and to Radio Art Zone for making this whole process possible… 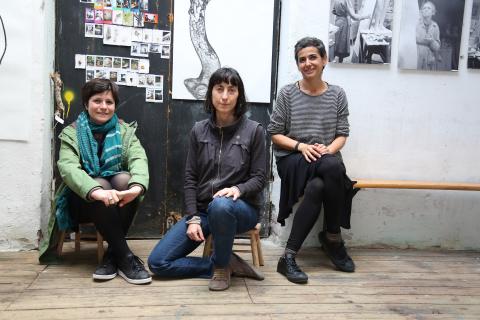 Oda Projesi is an artist collective based in Istanbul; composed of Özge Açıkkol, Güneş Savaş and Seçil Yersel who turned their collaboration into a project in 2000. From January 2000, their space in Galata functioned as a non-profit independent project space, hosting gatherings, exhibitions and acts up until march 16th2005, when Oda Projesi was evicted from the apartment due to the process of gentrification. Since then Oda Projesi has a mobile status and not any more a physical space based; continues to raise questions on space and place in projects by creating relationship models using different mediums like radio stations, books, postcards, newspapers or giving form to different meeting points; depending on and not forgetting the creativity of Istanbul and her citizens.