A cultosol is described as a soil type that has been altered and shaped in its structure and biological composition by human activity. This includes in particular soils in the city: former industrial areas, gardens, and parks, brownfields, etc. form a large variety of anthropogenically (culturally) shaped soil types.

Marcus Maeder visited Esch in early summer 2022 and recorded the sounds in the ground at three locations using specially developed recording technology. Not only sounds of the soil fauna can be heard - but also the specifics of each location: sounds of the nearby steel industry, train, air and car traffic that can be heard in the ground, as well as the above-ground sounds that penetrate the soil matrix, such as conversations of passers-by, ambulance sirens, wind, etc. In the 22 hours, we change locations three times: the acoustic journey into the cultosols of Esch begins in a quiet evening in the ruins of the former Schifflange steelworks, then moves to a compost heap in an urban gardening project in Belval, and ends in the ground next to the tracks of the ArcelorMittal steelworks.

The music, which seeks to interweave with the soil sounds as a sonic coexistence, comes from an analog modular system controlled by measured microclimate data (temperature, humidity and air pressure) of each site. Every hour, the recording devices in the soils of Esch recorded for twenty minutes each, during 24 hours. Every twenty minutes, a new time segment can thus be heard with a sonified microclimate measurement. This creates a radiophonic sound installation that can be listened to during the 22 hours and that changes continuously. 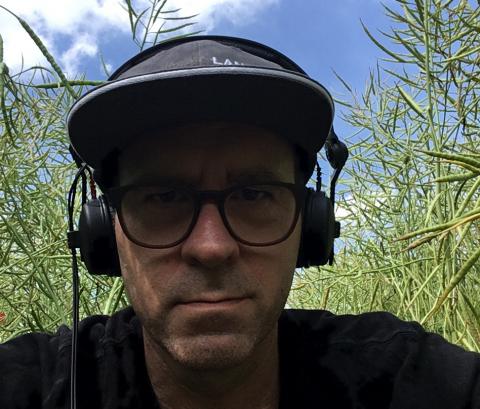 Marcus Maeder is an artist, researcher and composer of electronic music. Maeder studied Fine Arts at the Lucerne University of Applied Sciences, Philosophy at the Fernuniversität in Hagen and currently pursues his PhD in Environmental Systems Science at ETH Zürich. Maeder has worked as an editor and producer for the Swiss radio station SRF and has been working as a researcher at the Institute for Computer Music and Sound Technology (ICST) of the Zurich University of the Arts ZHdK since 2005. He currently is visiting scientist at the Swiss Federal Institute for Forest, Landscape and Snow Research WSL and Fellow at the Institute for Biology at Freie Universität Berlin.

In his research, Maeder is working on ecoacoustic investigations of areas, communities and organisms under the influence of climate change and other environmental issues. He contextualises his artistic and scientific work in the fields of Acoustic and Soundscape Ecology, as well as Artistic Research.

In 2017 Maeder presented his installation AmazonFACE: Ocotea at the Inter-American Development Bank in Washington – the same year where he and Roman Zweifel received an honorable mention from the STARTS Prize by the European Commission at the Ars Electronica Festival in Linz/Austria for their works under the moniker treelab.

In 2021, Marcus Maeder presented his Installation Silva (commissioned by the Goethe Institute Tallinn and in cooperation with Roman Zweifel) at the Estonian National Museum; Estonia’s President Alar Karis visited the exhibition.