Viv and Julia will be collaborating by bringing over 20 years of practice together in the 22 hours of Shadow/Text or Here Nothing Ends.  They have experience of each other's work since 1999 when they met in a workshop Julia was leading at FringeNYC in techniques for performing non-linear text and movement while Viv was performing as a vocalist and improviser in another piece. They recognized in their explorations kindred quests and stayed in touch throughout the years, seeing each other's work periodically. They reunited a few years ago when Viv took Julia on a soundwalk in Inwood Hill Park for her series wherein she explores people's sense of place and the link with memory, then transforms these walks into installations and recordings of Shadow-walks.

Julia has been writing and staging experimental theater texts since 1999, constructed from found text and memory and riffs on consciousness, both personal and collective. In the 22 hours, Viv and Julia will be exploring the physical places in New York City and London in which Julia wrote these texts. Both together and apart, they will be riffing off of the texts as palates in response to the words and what they are experiencing in the moment, not performing them but allowing them to inspire and be informed by their walks and collaboration. Beginning with Cut Up created in 1998 for Julia's first experimental theater lab created entirely from found text and memories up to Respairation or You Have to Unmute Yourself, written in 2021 while recovering from long-haul COVID and in the midst of a diagnostic process for autism, these 14 stage texts are a journey through many stages of life, including spiritual quests, philosophical interrogations, creative discoveries, marriage, divorce, miscarriage, terrorist attacks, new love, trauma recovery, and learning how to breathe.

Shadow/Text or Here Nothing Ends, because Viv and Julia are in process throughout. Instead of a number of discrete performances, these are experiments of ways in and through text, memory, place, and voice, while responding to each other and place with deep listening. They have also included their discussions about how to create this sound-text-scape. Welcome to backstage!

The texts Viv and Julia render in whole or in part begin with Julia’s first Cut-Up and end at her most recent Respairation or you have to unmute yourself (which is now available as part of a book of Julia’s hybrid texts, The Mortality Shot). The complete list of texts next to their first reading/performance date is:

The last text in the 22-hour show is Respairation, and was recorded with five actors and Julia, in three different time zones and countries; representing many periods of Julia’s writing and directing history and to whom she is grateful for their extravagant talents and generosity: Zoe Bouras (UK), Julia Brothers (NYC), Renee Bucciarelli (CAN), Marietta Hedges (DC), and Jacqueline Springfield (GA). 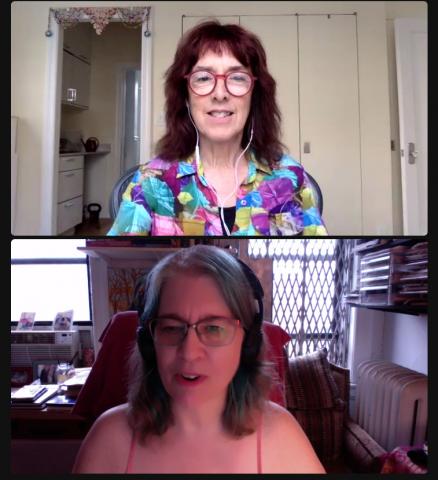 Julia Lee Barclay-Morton, PhD, is an award-winning writer and theater director, produced and published internationally; her first book-length hybrid collection of essays, stories and stage text, The Mortality Shot, is available now at Liquid Cat Books; this collection includes her newest play Respairation or you have to unmute yourself—written while recovering from long-haul COVID and in midst of process of being diagnosed on the autism spectrum and performed in IATI’s Women’s Herstory Festival in March 2022; recent stories and essays published in [PANK], Prairie Schooner and Heavy Feather Review, winner of Nomadic Press Bindle Prize for a story published as chapbook, and play On the edge of/a cure was produced by Rogue Players at The Playroom in 2019. Her play Shit was given a staged reading at IATI as part of the Cimientos play development program in 2018, and her plays have been performed in NYC at HERE, The Brick, Red Room, and St. Mark's among others. A Best of the Net nominee, she was also chosen for the Indie Theater Hall of Fame in 2014. She has been in residence at Vermont Studio Center and the Wesleyan Writers Conference. Other publications include Ohio Edit, Prentice-Hall, Stockholm Review, Gertrude, The Other Stories, Burning House Press, and TL; DR. Stage texts have been anthologized by NYTE and Level4 Press. She founded Apocryphal Theatre when in London (2003-11), and was awarded a full fellowship for her practice-as-research PhD by Northampton, UK arguing that theatre can be an act of philosophy; her BA is from Wesleyan University. Now living in NYC, she is writing a hybrid memoir about being diagnosed on the autism spectrum in her late 50s and how an intensive yoga teacher training led her there. Julia also paints, coaches, teaches writing and yoga.